A: Many parts of Seattle are essentially experiencing a race to determine how much land is occupied by $1M+ single family houses or two or more $700,000 townhomes:

Using Seattle teachers as a benchmark for good middle-class jobs, two young teachers at least have a shot at qualifying for a mortgage on a $700,000 home.  But even at peak earnings, a $1M home is likely out of reach for a two-teacher couple. 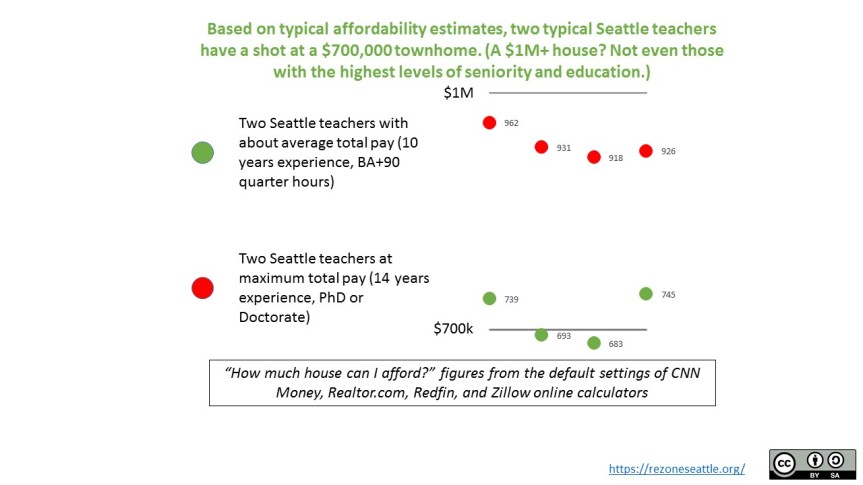 So if one $700,000 home is replaced by two or more, or if a teardown is replaced by $700,000 townhouses rather than a $1M house, we’re expanding the footprint of homes still accessible to families who have good middle class jobs. Here’s how the numbers work out:

A Seattle teacher with a BA plus 90 quarter hours of additional education and 10 years of service receives total compensation of $71,949. (This is about the average of the minimum and maximum teacher salaries.)  So our couple has a combined annual income of $143,898.

Plugging that into the default setting on four different online “how much house can I afford?” calculators $700,000 is either within the recommended limit or close enough that with a bit more of seniority or education that bumps up their pay our couple might qualify. Everyone’s circumstances may differ, of course–but as a general indication of what industry standards define as feasible, our couple has a shot at that price point.

When is a $1M home within reach to two Seattle teachers? Never.  Two teachers with the maximum credentials and seniority–PhD’s or Doctorates at the maximum step of 14 or more years of service–make a combined total of $188,018. Plugging their income into the same calculators with the same settings gets them, at the very highest end, to $962k.

Every  $1M+ house puts a home in Seattle out of reach of middle class families, while $700,000 townhome gives them a fighting chance. That’s another reason we need to rezone Seattle, ASAP.

Methodology:  Four “how much can I afford” calculators were used to generate an answer based on inputting only income.  Default settings were left unchanged. The intention is to generate ballpark figures for what a given income could likely bear.

One thought on “Q&A: How can $700k townhomes help affordability?”

Q&A: What could more open zoning look like? (photos)

Q&A: What could more open zoning look like? (infographic)

Q&A: Could single family zoning really be that bad?

Q&A: How is banning duplexes even legal?

Q&A:We’re building a lot! Is it enough?